It has been a while since the last Concealed Intent screenshot. As work is now progressing again at a decent rate after moving country, it is time to share the progress. 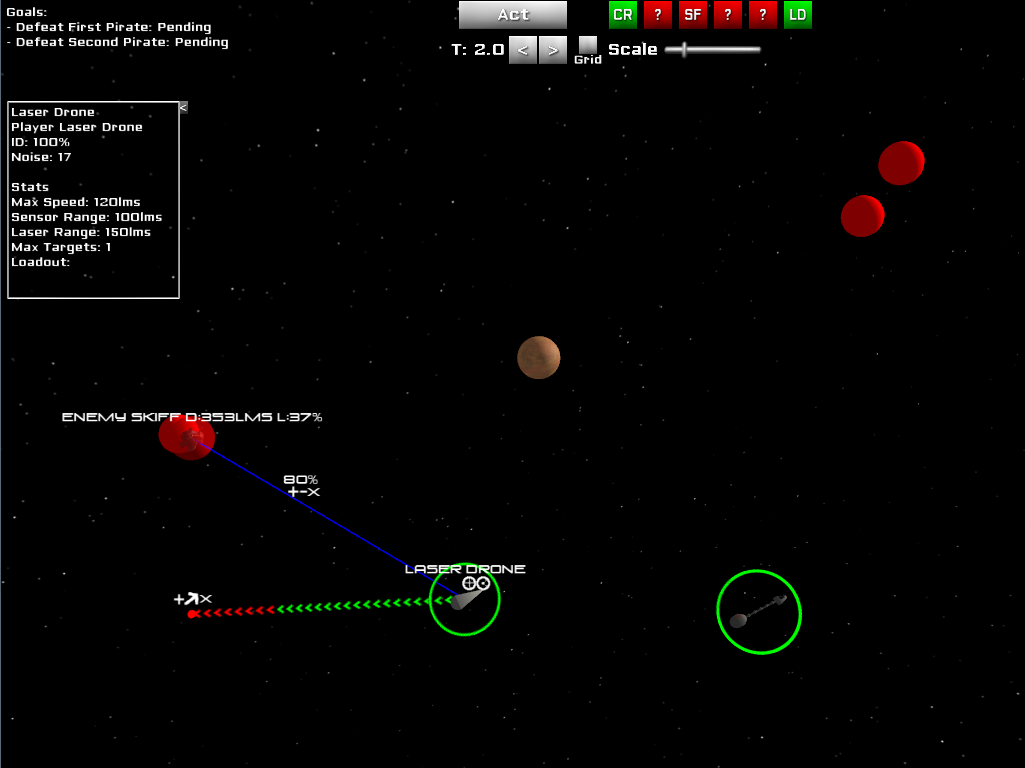 The last month has been largely spent on GUI improvements. Much as I’d like to spend all my time on the engine and networking, the GUI needs more work. Early feedback suggested the game was hard to understand. Thus, various information and control elements are being added to see what helps make the game more intuitive.

It should be noted that all the artwork is work-in-progress and largely created by someone with little graphical talent (me!). It will be replaced by more professional content once it is decided exactly what content is required.

In this screenshot we see a Player Corvette and Drone facing off against a Skiff and 3 other unidentified objects. The Drone has been selected and it is targetting the Skiff (firing when the chance to hit is greater than 80%). It is also has a move planned. The green chevrons show how far the Drone can move in the next turn. The red chevrons show what will remain of the planned move for subsequent turns (the game is turn based). As the Drone is selected, some statistics are now displayed on the left. This was specifically suggested by a tester and caused some thought on my part (which will be the subject of a future post). All the planning options available to the ship are shown by icons displayed close to the point they are used (move controls are positioned at the last set waypoint, targeting controls midway to the target).

Hopefully controlling the game is now clearer, but there is still more work to do!

I think the controls around shooting are confusing. It is not obvious (as testers confirm) how lock, range and hit percentages relate to each other. Here the drone has a lock of 37% on the Skiff at a range of 353lms, which equates to a chance of hitting of around 5. Since the Drone is waiting for a hit percentage of 80, it won’t shoot. Got that? I didn’t think so.

I think specifying the distance units doesn’t help. It might be better displayed as a dimensionless number. LMS stands for light milliseconds or the distance light travels in a millisecond or 300km (so the Skiff, at 353lms, is 106000km from the drone or roughly 30% the distance from the Earth to the Moon). The distance relative to the speed of light is important in the sensors calculation, but probably not to most players.

Can you tell the game is 3D? Testers report that they didn’t realise they could move up and down out of the horizontal plane. Partly this is an issue of the game being set in space. There is no visual indication of height. I need to add one - not sure how yet.

So there are the recent achievements and the immediate goals.