I’m not a big believer is providing reams of stats for game players. It can lead to many games being, well, gamed. Even when playing old pen-and-paper RPGs like D&D I thought it ruined the fun and mystique if the players knew the details of all the monsters. The gameplay could just devolve into little more than spreadsheet optimisation. It is not realistic to know the complete details of your own situation, let alone your opponents. Where is the fog of war?

But games are generally not realistic on purpose. 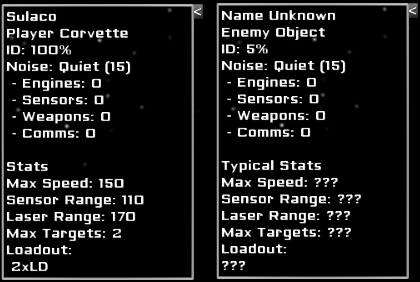 After sending out the first Concealed Intent alphas (which contained nearly no stats), one of the main comments back was “needs more stats”. This ran counter to my initial philosophy, but I still took some time to think about it. Now, there will be some stats available. Although the amount of a player’s “knowledge” will depend on how the game is going for them - the more lock on an enemy, the better the stats available for that enemy. Above are the current Concealed Intent stats blocks for the player’s ship “Sulaco” and a currently unidentified enemy ship.

Why have I changed my mind? Firstly it is a matter of convention. Most games give out stats promiscuously - especially tactical/strategy games. The second reason is why I think it is convention: people want to know how the game works. Chess is a popular game and everything about the state of the game is clear to everyone (players and observers). There are other games with imperfect information. Poker is a good example. However, even when something is hidden, it is well know what is hidden as the rules are open and clear. I think part of the reason people want more stats in Concealed Intent is because is is not clear how the game works or what are the rules. In this case the stats work as a hint on how to play (and a promise that the game is not cheating - that there are set rules). So the stats block shown above hopefully lets players know that the amount of noise they generate performing various actions is very important (as the more noise they generate the easier their enemies detect them, and vice versa). This will be my guiding principle from now on.