It is time to decloak. For some time I have been developing the indie game Concealed Intent. After years as an IT consultant, my circumstances changed and it was time to try something different. The game has largely been developed by myself, with the much appreciated help of a freelance artist in the last few months.

As obscurity seems to be the indie gamedev’s greatest enemy boss, introverted tendencies must be overcome. So that is why I’m writing this blog. In future posts I’ll write on lessons learnt (both technical and otherwise) as well as detail the last push towards completion, but first some introductions.

Concealed Intent is a turn-based game of tactical space combat. Players control their ships in a completely 3D world - hunting down their enemies, just as they are being hunted themselves! In Concealed Intent you know your enemies are out there, but not exactly where, or even what they are. The fun comes from out-thinking your opponent rather than any test of reaction speed. 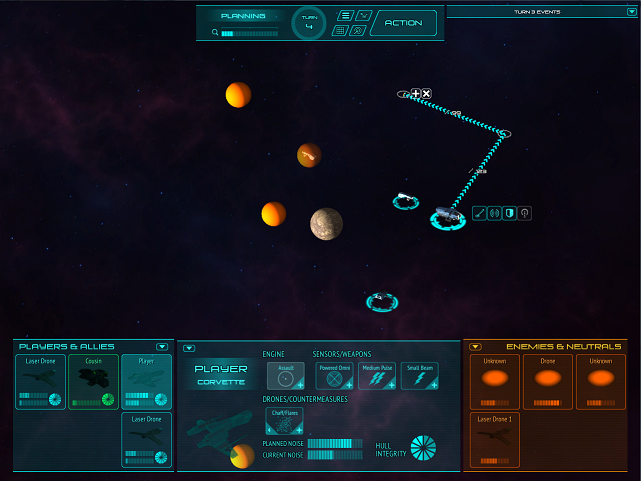 The core gameplay mechanic is stealth. But how can you be stealthy in space? Well, space is big and empty. Finding something can be like looking for a needle in a haystack. On the other hand, there is nowhere for the needle to hide - to stay concealed it needs to fade into the background as much as possible. Nearly anything a ship does will signal its presence and increase the ability of those around to detect it. A big ship may blot out stars as it passes. Heat from engines can be detected against the cold of the void. Lasers can be traced back to their origin. Eventually as detection increases, a firing solution can be calculated so that a beam of coherent light a few millimetres in diameter can cross thousands of kilometres to strike an evasive enemy - hidden no longer!

To defeat your enemies you need to devise a range of strategies to gain enough information to successfully shoot at them. All the while they are trying to do the same to you. Various equipment is available to help both sides, including sensors, countermeasures and drones. There will be a single-player campaign, instant procedural skirmishes and online multiplayer.

Concealed Intent has been the last two years of my life and it is finally nearing completion. Time to start telling people it exists! (or will very soon exist at least). By the way if the screenshot reminded you of Homeworld, well done, that game is definitely an inspiration. If you read the description and thought of submarines, well spotted, the original name of the game was space submarine!