Just today I sent out the first email on the Concealed Intent mailing list. Since it is important to get the good news out as wide as possible, I’m also putting the information here.

As of yesterday, this is how Concealed Intent looks: 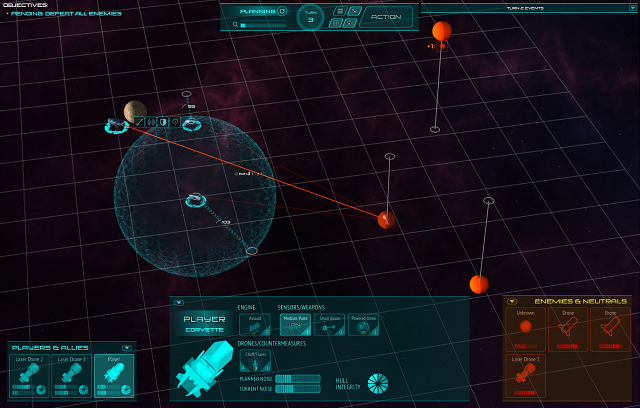 Just this week the last of the scenario placeholder art has been replaced by professional work, although there is still some developer art in the menus. So now the game looks much prettier. This is not to say there will not be further changes - suggestions are welcome.

At present Concealed Intent is in early playtesting (where I watch people trying it out). The results are promising, each playtest goes better than the last. The game is playable, but still a little hard to understand. The main focus of current work is making the game more intuitive and improving the tutorial (a surprising large task). Other tasks include completing the second half of the single-player campaign; expanding online play beyond the current proof-of-concept; and general polish & game balance.

I am beginning to see the light at the end of the tunnel. Concealed Intent will be finished… soon.

I’m looking at putting the game on Steam Greenlight. When that happens I’ll send another email asking for your support. There will also be a closed alpha test sent out probably end of March, early April. Again I’ll send an email asking if you would like to take part in the testing.