This article was first posted on my personal blog

It has been a couple of months since releasing Concealed Intent onto Steam Early Access it is time to assess how things have gone and plan for the future.

While I’m quite happy with Concealed Intent as a game, financially it has been a disappointment. Largely this is my own fault. As a sole developer I must make a choice between developing or marketing. I have overwhelming chosen dev work over the last 2 months. Still the sales have still resulted in a few people playing it and providing feedback. It has highlighted a some bugs and issues, most of which are now fixed. Early Access has also given me a focus - single player skirmishes seem to be more highly desired than online play (lucky because there are not enough players to form a decent online community right now). This is immensely useful information. Previously the game was trying to be a bit of everything in the hope of attracting the attention of a potential purchaser. Now it will be mainly single-player, where skirmish is the main game, but there is a also basic online play so you can challenge your friends. 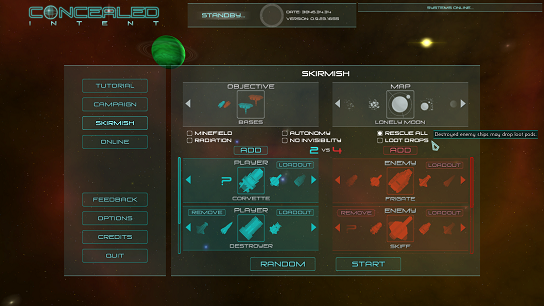 Under this vision, the way forward to release is clear. Procedural skirmish must be expanded with an AI that can provide some challenge. The single-player campaign can be shortened but needs to more engaging while subtlety teaching the game. Online play is largely done, only bug fixes and performance enhancements remain.

So that is the plan to finish Concealed Intent. Skirmish improvements, then AI improvements, then mission work, then… done? At least in the sense of a proper “release”, yes it will be done. The majority of my time after that point will be spent on developing other games. There will still be a few things to do Linux support, non-Steam online support, other little improvements and of course bug fixes as required.

Right now I’ve nearly finished a first pass at the Skirmish improvements. If it was not for GGJ16 I’d release it this weekend. Instead it will be available early next week (so I’m around if there is a problem). I hope to have a final version with improved AI by mid-Feb. Then I foresee a couple more fortnightly versions iterating on the campaign and improving skirmish & AI as issues/ideas arise. However, that will not be the end. As previously stated, I have to choose between development and marketing. Since I have a couple of months of dev work, I will continue mainly with that for now. However, when the above task list is complete it will be time to switch. Thus the plan is to finish the dev work, wait at least a week to ensure there are no bad bugs, then start a 30 day release countdown where I spend a few hours per day solely on marketing. Then the release, followed by another week of marketing. Then just see.

One thing I don’t expect to see is a flood of sales. I hope to have enough sales to cover my costs and provide enough money for a future game. The feedback received so far is generally positive, but not “indie breakout hit” positive. I will likely struggle for media coverage and sales amongst a horde of other indie games. One advantage I have is that my situation is unchanged, there is not much I could be doing other than creating games. I have another 15 months before reality returns. Thus I can create another game with my hard-won lessons from Concealed Intent. In fact since the main lesson learnt is to make much smaller games, hopefully I can make more than one. Ideal would be a couple of short (3 month dev work) games made with an artist willing to profit-share (to keep upfront costs down). I have collected a few such small ideas and it is time to start creating prototypes to check if they are worth pursuing. By mid-Feb I hope to be spending about 10-20% of my time on this task - a pipeline of work must be established to take over from Concealed Intent as it requires less time (not counting marketing of course!). Otherwise there will be no chance of continuing gamedev as a profession long-term.

The other main lesson is that marketing is hard. Very hard. There are a large number of people out to get keys for “reviews”, but very few can deliver and those asking are almost always the smaller media outlets. The larger ones are probably swamped with review requests. Getting noticed is difficult. During the release-30 countdown I’ll do my best to let people know Concealed Intent exists. Although I’ve also been considering trying to become the media. Sure, I have a couple of rarely viewed blogs (like this one), but viewing some the of key requesters’ outlets made me wonder if I could try that too. Basically an attempt to build a community around games in general, not specifically my games. Maybe it will happen, maybe it won’t (check back here to find out!). I have a few ideas on how to make things a little different to others, now I just need to check the time requirements. There will probably be one video just to experiment.

Hmm, still so much to do and so many possibilities. But first to GGJ16…