It has been a while, so perhaps time for an update on what is happening and what is planned for the near future.

Right now I am working through ideas and mechanics for Project Blockade Runner. That is not its real name, but I haven’t thought of anything better yet. It is still at a very early stage, and the basic concept is still mutating (the blockade part is decreasing in prominence), so I don’t want to share screenshots yet. Although for people who regularly read this blog, it was one of the paper prototypes from this post, shown again below. This one seemed the most interesting to me. Also, I think the basic game mechanic can be reused as an engine in a couple of different games. So this one scored best on interest, ease and business. You can be confident there will be more info about this game in the near future. 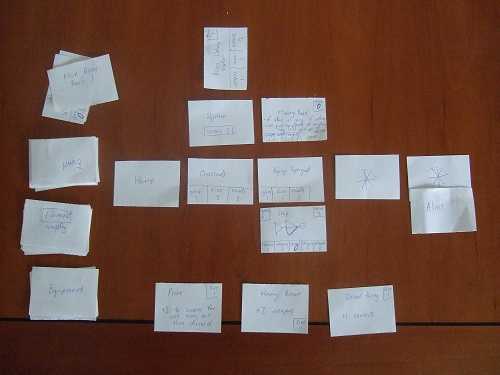 Unfortunately, the game seems to be more Blocked Runner at the moment. My personal log says I have managed just 17 hours work on the project so far - and it shows. What has been happening instead over the last five weeks since the Concealed Intent 1.1 update? Well, I went away for a week to recharge. Very nice break it was too. Many admin tasks that were “left for later” as Concealed Intent headed towards release back in August are now completed. According to my log that has taken 42 hours of effort in recent weeks. There was quite a backlog, but they are all done now. I have also been playing games. Of course this is work, really it is! I have put some videos up on my personal YouTube channel and associated blog.

Also there has been a dribble of work on Concealed Intent. Two small bug fix updates have been released. If there are more bugs discovered I will fix them ASAP. Otherwise, I will be taking a break from the game until the new year. At this stage I’m fairly determined to make at least a 1.2 release before the middle of 2017. After that it will depend on sales and time. I have started compiling a list of “must-have” items for a 1.2 version. Currently there are 8 items on it comprising about a week’s work. That means there is another fortnight or “nice-to-have” items that I could do, plus maybe another week of experimental/exploratory items. That would make for a decent solid release. I have a good list of possibles improvements. Anyone who contacts me with a suggestion also gets it added to the list for consideration.

I had better get back to work!