Routine & State of the Game

With a new year, it is time to evaluate how Jarrah Technology is progressing and determine a plan for the future.

My first game, Concealed Intent, was fully released on Steam at the beginning of August. Since then there have been a few minor bugfix releases and one major (1.1) update which included Linux support. Reviews are generally positive, players on the forums are great, although sales have been slow. Below is an updated graph of revenue vs costs from my postmortem. Revenue will probably stagnate over the next few months as the effect of numerous platform sales subside. Valuing my time at zero (never a good idea), the game should be profitable before mid-year. Not awful, but not a great result. 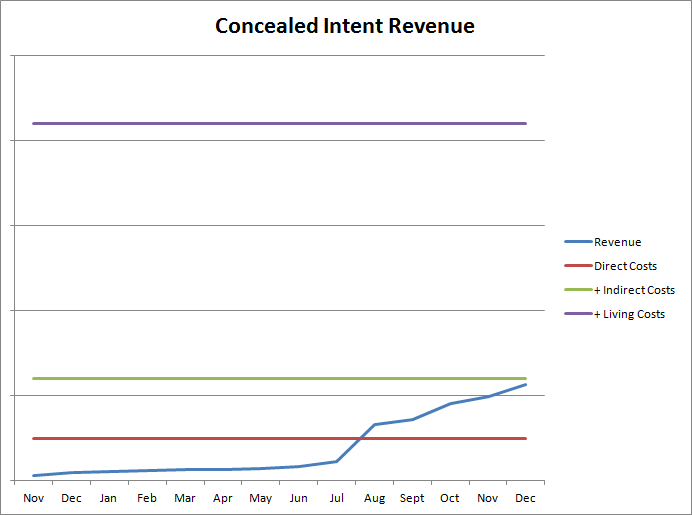 Work on Concealed Intent is now slowing. There are a handful of very minor fixes to be applied plus a few additions to skirmish and campaign play. It is probably not reasonable to try extensive modification to improve its popularity. It is a niche game, with a correspondingly small audience. Plus, experience has shown my marketing skills lack much effect. However, this does not mean that development work is completely over. I would like to upgrade the game to the most recent version of the toolkit (Unity 5.6), and create a non-Steam-DRM version for Humble and Itch.io.

The immediate plan is to leave CI alone while I get a good base of work completed on other projects. Then start a 1.2 update with either a non-DRM or Unity 5.6 version as the main task, plus other minor items and bugfixes making up at least 3 weeks duration (not counting testing), aiming for release in March or April. Then the game will be left alone again for a few months before beginning a final 1.3 update in the second half of the year. This will contain all the remaining tasks that must be completed, because after this it will just be bugfixes. Hopefully it will be only on the order of 3 weeks dev work.

As Concealed Intent approached release I started playing other games again. For the previous four years of development there was very little time for non-work activities and my game backlog began to grow. I decided to play more games to become aware of the state of modern game design. To help I started the A Gamedev Plays … website/blog and YouTube channel. Despite plans to work intensively on a new game, I hope to continue playing games and publishing my thoughts.

As previously stated, work has begun on my next game, codenamed Blockade Runner. One of my first tasks is to think of a better name! Progress has been very slow as other tasks and holidays have taken precedence. Now I need to just buckle down and get to work. I’m happy with the basic idea and confident it can work, but really need a gameplay prototype to test out my assumptions. Especially since I hope to be largely finished with the basics within the next few months and then just polish it. Also I need to get a proper name and start the marketing process. I plan on being more open to the community while working on this game. This will mainly come in the form of more regular updates and perhaps even video dev diaries.

Writing it all down, it looks like I am committing myself to an overwhelming (and unlikely) workload. I think holding to the plans outlined above is possible, but will require some discipline and luck. It is very possible some tasks will slip. The main problem on the horizon is moving countries scheduled for May. I will be leaving Malaysia and going somewhere else, as yet undecided. This may steal a great deal of my time. I hope to build a routine (at least until moving) to try and help achieve as much as possible - previously I have worked well under such circumstances. It will be a 1/4/2 system. Monday will be for admin, blogging, marketing and A Gamedev Plays. Tuesday through to Friday will be dev work as much as possible. Saturday and Sunday will have less time available on Jarrah Technology as it will mainly be spent with my girlfriend, exercising, or getting things done around the house. The idea is that this will allow me to effectively focus on a single set of tasks each day, rather than jumping around like when developing Concealed Intent.

So that is the plan, now to implement it!